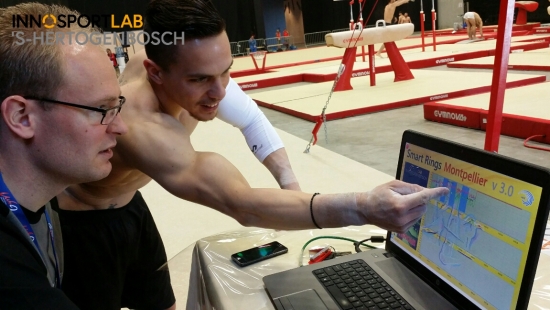 Force measurements on a ring system

On the European Championships (ECh) Gymnastics in Montpellier (april 2015), gymnasts will perform their routines on the equipment from the French supplier Gymnova. Within the project “Smart Rings”,  the InnoSportLab ‘s-Hertogenbosch already performed force measurements on the rings last year at the ECh in Sofia (2014) . The InnoSportLab was faced with a challenge to also perform force measurements at the ECh Montpellier on Gymnova rings.

After the necessary preparations, Gymnova visited the InnoSportLab on the 9th of March (2015). During this day, Gymnova and the InnoSportLab installed the sensors on the rings of Gymnova and tested the rings in the gymnastics exercise hall of de Plek in ‘s-Hertogenbosch.  At this moment, two rings are installed in the exercise hall: one from Janssen-Fritsen (J&F) and one from Gymnova, both with force sensors in the upper beams. The rings will be compared with each other, on different properties.

On basis of those tests, and in cooperation with J&F and embedded scientist Arno Pluk, a new version of the Smart Rings has been developed; ‘Smart Rings 3.0’. The new software also has the functionality to support judges in an objective way when evaluating the hold time of different force elements on the rings during a routine.